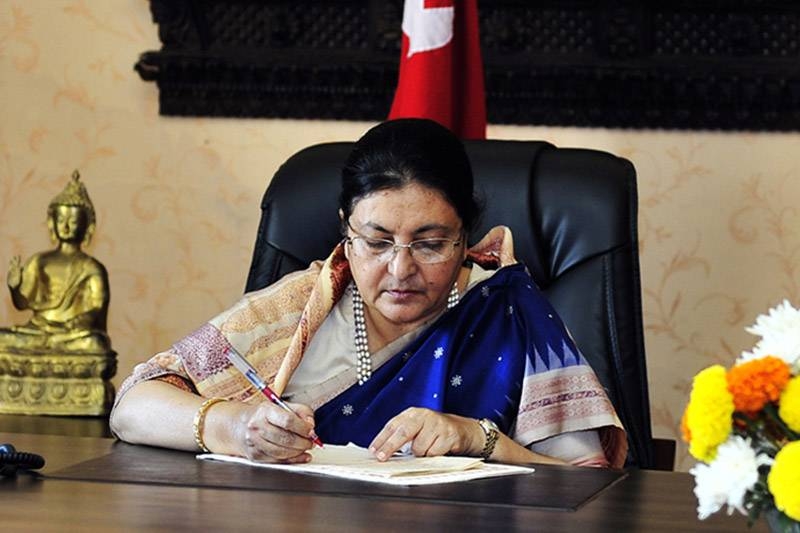 President Bidhya Devi Bhandari certified the appropriation bill after it was passed by both houses of Parliament. The bill, which was passed by the House of Representatives on September 20, was passed by the National Assembly today amid obstruction of House proceedings by CPN-UML lawmakers.

The adoption of the bill put an end to the budget holiday observed since September 15.

CPN-UML lawmakers hampered proceedings in both chambers accusing President Agni Sapkota of aiding the party’s split by failing to confirm the expulsion of 14 UML lawmakers.

Amid the obstruction of the House, NA President Timilsina allowed Finance Minister Janardan Sharma to table the supply bill. The majority members of the Upper House then passed the bill paving the way for the end of the budget recess.

Timilsina also urged UML lawmakers to end their obstruction, but they continued to obstruct House debates without chanting slogans.

In the HoR, UML lawmakers did invade the House as soon as Sapkota started the business of the House. UML lawmakers chanted slogans protesting the speaker’s alleged bias, after which Sapkota told them that Parliament was the highest place to practice democracy, but the obstruction continues to a when crucial budget bills were debated, could restrict democracy.

Sapkota urged UML lawmakers to end their obstruction to allow the House to address some of the major issues facing the country. He said that with the expulsion of 14 UML lawmakers pending in the Supreme Court, it could not be discussed in the House.

Amid obstruction from UML lawmakers, the House passed two budget bills – the Budget Bill and the National Debt Relief Bill – related to the budget.

A version of this article appears in print, September 24, 2021, of The Himalayan Times.