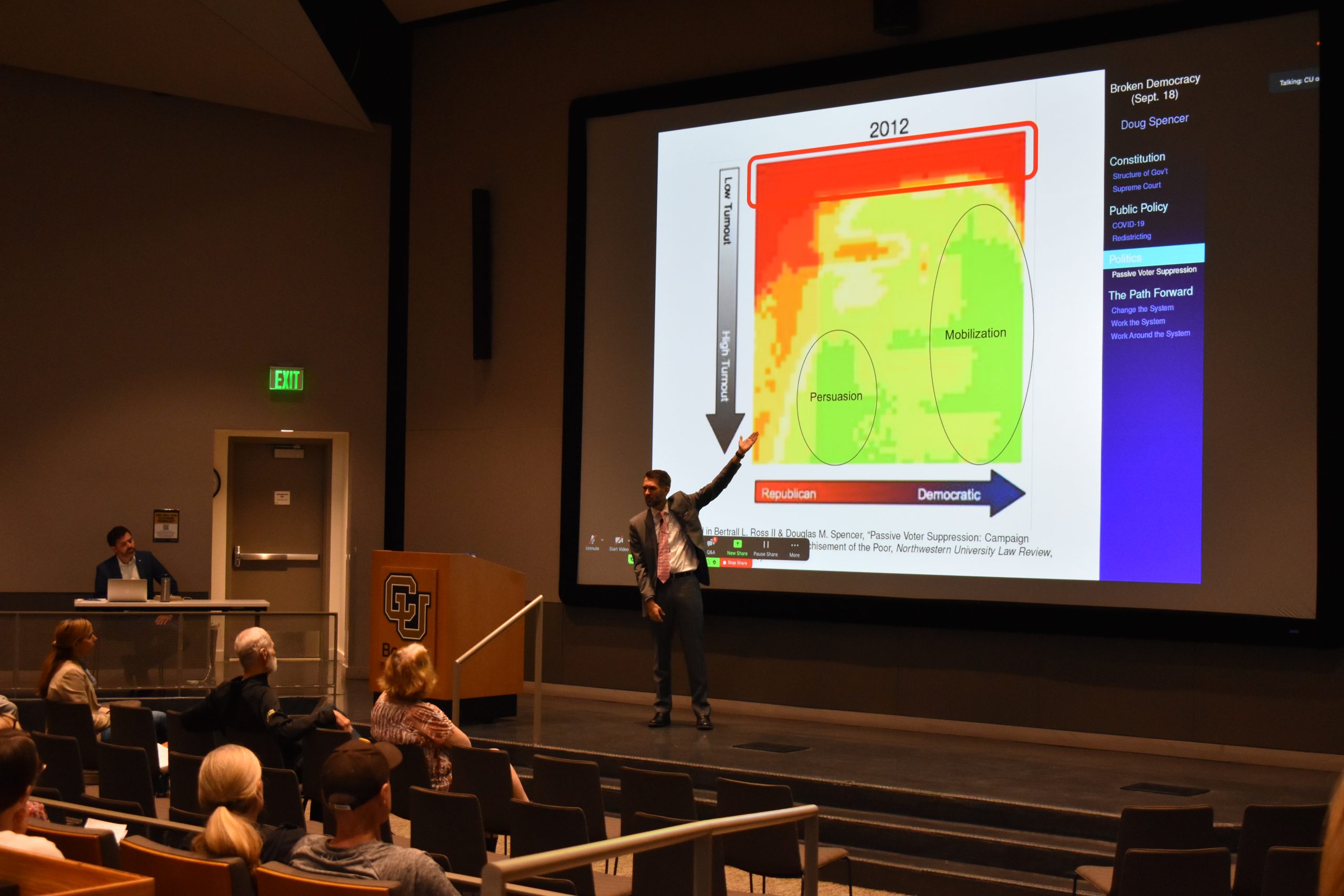 University of Colorado Boulder law associate professor Douglas Spencer addressed a hybrid crowd for the first UC of the fall semester weekend conference. He focused his lecture on how the political process in the United States does not work as well as it should, but can be improved by law.

On Saturday afternoon, Spencer presented his lecture, “America’s Broken Political Process and the Path Forward” as part of the CU on weekends series. CU on the Weekend hosts free weekend public lectures from CU Boulder faculty on a wide range of topics, including arts and humanities, music, science, and engineering. Saturday was the first hybrid conference since the pandemic when the series had to go virtual.

Spencer is an Associate Professor of Law and Associate Dean for Faculty Affairs and Research at CU Boulder Law School. He is an election law expert whose research focuses on how racial attitudes affect and are affected by election laws.

Spencer focused on the lack of voting rights protections in the United States and how this negatively impacts democracy. He said the US Constitution fails to demonstrate democratic properties when it comes to these voting rights over other “enshrined” rights like guns and religion.

Spencer provided an example using the 2021 Brnovich v. Democratic National Committee Supreme Court case. Judge Samuel Alito wrote in the majority opinion that “mere inconvenience cannot suffice to demonstrate a violation” of the current ban on voting for racial discrimination, as described in the Human Rights Act 1965. of voting.

“Voting rights can be restricted in ways we wouldn’t otherwise tolerate,” Spencer said. “How much inconvenience are we as a city or as a county willing to tolerate?”

Spencer pointed to the rise of “microtargeting” in the mid-2000s as the reason many voters feel left out by presidential candidates. Micro-targeting allowed candidates, especially Barack Obama in 2008 and 2012, to visualize the party affiliation and likelihood of voting of specific households to target whom to persuade and engage. People from the opposing political party or those who were unlikely to stand at the polls were contacted much less.

“People feel like they’ve been written off…we haven’t created incentives for our parties or campaigns to behave in a way that promotes equality and participation. We told them to win at all costs,” Spencer said.

To address these issues, Spencer focused on three broad solutions: changing the system by amending the U.S. Constitution to include protections for the right to vote, suing for state-level suffrage violations, and working with communities and organizations fighting for equal voting rights.

“I think one of the ways we can change our country is through law,” Spencer said as he concluded his talk. “The law is not a perfect balm, but the law is rigorous.”