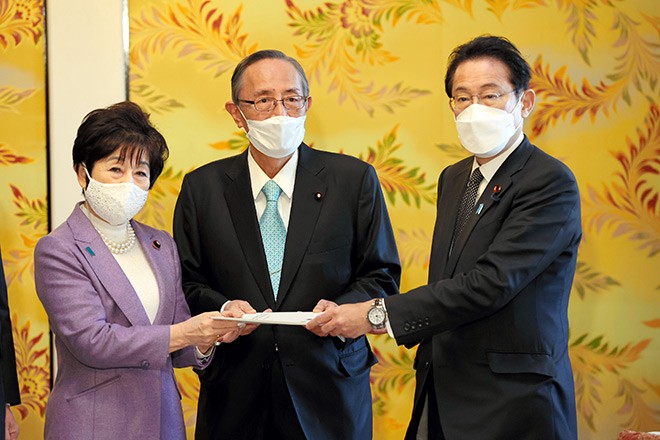 Prime Minister Fumio Kishida has handed the burning issue of imperial succession to the Diet, which is expected to divide lawmakers as there is no concrete proposal for the future at present.

On January 12, Kishida submitted the final report on the succession to the throne prepared by a group of government experts, chaired by Atsushi Seike, former president of Keio University in Tokyo, to the Speaker of the Lower House and the Speaker of the House high.

The Diet debate is not expected to go smoothly as ruling and opposition parties have divergent views on the matter.

When presented with the report, the Speaker of the Upper House, Akiko Santo, said: “(Imperial succession) is a very important issue which concerns the basis of the way our country is.”

Lower House Speaker Hiroyuki Hosoda said he would summon representatives of political parties next week and ask them to study the report.

The government created the panel in 2017, in response to a call from the Diet. The Diet enacted a special law that year allowing the abdication of former Emperor Akihito.

An additional resolution added to the law called on the government to discuss and report on issues such as challenges regarding the maintenance of a stable imperial succession as well as the establishment of branches of the imperial family headed by female members of the family.

The panel submitted its report to Kishida in December last year, who made two proposals: one is to allow female members to retain their royal status even after marriage; the other would allow males of the paternal line of the Imperial Family who are members of older branches of the family to regain Imperial status through adoption into the Imperial Family.

The report effectively puts aside the question of how to maintain the imperial succession after Prince Hisahito, Emperor Naruhito’s 15-year-old nephew, saying that discussion about it is “still premature”.

The report also did not discuss whether to allow a daughter of the emperor or a child of the female line of the imperial family to ascend the throne.

Within the ruling Liberal Democratic Party, the persistent view is that only a man of the family’s paternal line should inherit the throne. Toshimitsu Motegi, the LDP General Secretary, praised the report saying, “It is a very well balanced report.

He suggested that the issue of imperial succession needs careful discussion, saying, “Things should move forward in a calm setting.

Nishimura said the report postponed discussion on the topic which needs urgent debate, making it clear that the report cannot serve as a basis for future discussions on the matter.

However, the political parties privately do not want detailed talks on the imperial succession to take place any time soon, lest it become a key issue in this summer’s election campaign for the Upper House.

Therefore, it is unclear when the practical debate on the issue will begin.